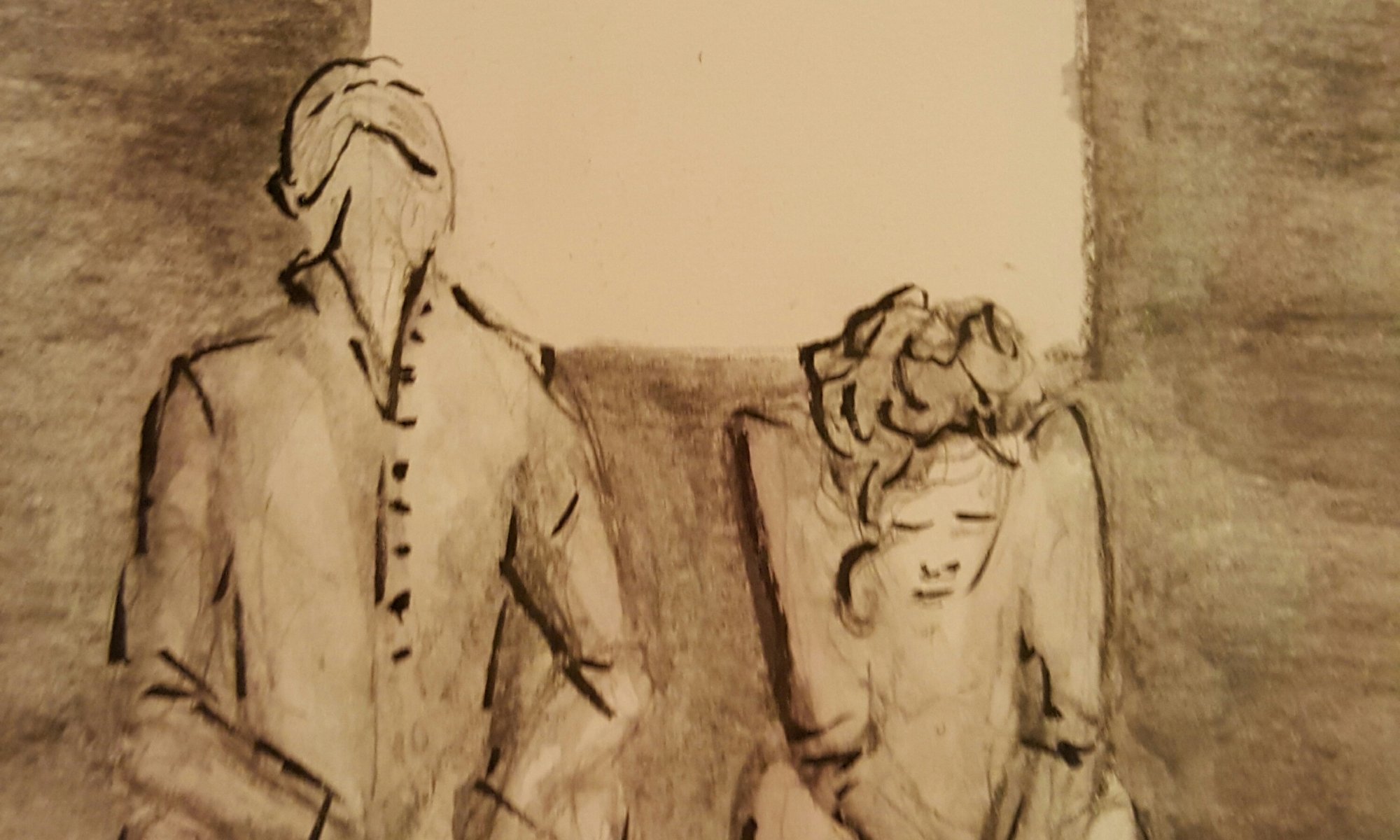 The rakish twinkle returned fully to the King’s eyes and he finished his tea, watching and waiting for me to understand.

A blush crept up my cheeks. “But that means, you and Hess…she’s your…are you still…?” I was far more flummoxed by this than I ought to be. Though, that did explain Naran’s red hair.

“Yes,” Tarr sat up and set his empty cup on the tray. “She is, and I’ve gotten to see much more of her than usual thanks to you.”

I shifted on the couch, trying to readjust my perception of Hesperide. I’d assumed he liked having her around because she was beautiful and kind—somehow her pregnancy had made me think that there was nothing else. An absolutely ridiculous assumption. I turned to Tarr with a start, “Does she think we—that you and I—like the rest of the palace does?”

Tarr gave me an amused look and tugged on his doublet. “You can ask her if you like.”

I stared at him, he couldn’t possibly mean that. “Tarr.”

The King met my eye for a moment then relented with a smirk, “She does not.”

I slumped with relief, and then cringed at the stiffness of my torso. “The baby is yours?”

He nodded, pride warming his features.

Quill returned from his circuit of the chambers the same moment Hesperide returned with a bottle of wine and a glass. They both relaxed a little as they noticed Tarr’s brighter mood. Quill paused behind one of the large chairs in the sitting room and Hesperide came to the couch. She set down the glass and started to pour wine but Tarr reached out. He snagged her hand and tugged her toward him. Hesperide started and stared at him in confusion.

Hesperide looked at me apologetically, and then allowed herself to be pulled into Tarr’s lap, his arms circled around her. I scooted away to make room for her knees. She snuggled closer to Tarr, settling one arm behind his neck and twining her other hand in his doublet. Tarr closed his eyes and leaned his forehead on her shoulder. A shudder ran through him, not unlike tremors of a wounded man receiving treatment for an awful injury. My insides cringed with foreboding. Hesperide felt the shudder and immediately looked over her shoulder at Quill, a question in her eyes. What had happened today?

The grim look returned to Quill’s handsome face, he gripped the back of the chair. “Thirty nymphs were executed in the Cathedral Square today.”

“Khattmali ordered it this morning; they were charged with attacking the Queen’s forces on the Cymerie River,” continued Quill.

“But they weren’t involved,” I whispered.

“That hardly matters to the Nether Queen.” Quill lifted a shoulder.

“Men and women. I couldn’t do anything to save them,” mumbled the King. “They begged. They all died because I could do nothing.”

“They died,” Quill’s voice was sharper than I’d ever heard it, “because the Nether Queen ordered a public execution to make the people think we’d caught the ones who defied her.”

“They are not the first, and won’t be the last,” Quill snapped. “Not until we can get out from under her.”

“Everyone is dying,” said Tarr, his voice dull.

Hesperide tossed a glance at Quill that said ‘let me handle this’ if ever a look did. Quill grimaced and turned to go. I rose to follow him, giving Tarr’s shoulder a pat as I went. Tarr had become my friend, but with Hesperide there I felt like an intruder. I was also pretty confident she could handle his despair much better than I could. The quiet of her face assured me I was right.

Quill saw me coming and waited for me at the door. “Where can I take you, my lady?” he said wearily.

I looked back at Hesperide and the king. She had taken his face in both her hands and was whispering something to him. “Anywhere you like.”

He followed my glance, his lips turned up wryly, but not enough to chase the sadness from his eyes. He looked back to me, evaluating my muddy dress. “Come on,” he pushed open the door and led the way out of the king’s chambers. The guards at the door saluted him as he passed. They didn’t even look at me.

We didn’t get far down the main corridor before Quill pulled aside a sweeping blue drapery to reveal a dim servant’s passage through the stone. The passageway was barely wide enough for Quill’s shoulders, and I couldn’t help but wonder if Jemin could even fit through these crannies. They weren’t meant for guards, or even food service beyond small plates. These passages were so staff could be ever present, ever invisible, and able to accomplish errands quickly. And indeed, Quill moved swiftly through the little maze and I, already tired from my trip to the kennels, was soon struggling to keep up. Sweat dripped down my back and I concentrated on breathing as I trundled after him, using my hands like another pair of legs propelling me along the walls.

It wasn’t until Quill darted into a side passage to avoid voices ahead that he looked back at me. One glance and worry painted itself across his face and he quickly closed the distance between us. He took my hands, brushing my hair off my sticky forehead and inspecting me. “You’re pale,” his voice was low as he bent close. My heartbeat quickened and I stood very still, finding it very hard to catch my breath with Quill standing so close. “Can you keep going?” he asked.

I nodded quickly. “Just, slower,” the words came out in a gasp.

He grimaced. Keeping hold of my hand, he led the way again, but at a much gentler pace. We took a couple more abrupt turns to avoid servants, and then we came to a narrow stair that smelled dusty and deserted. Quill hauled me up billions of stairs, until we came to a small landing with a window. The landing was only about four feet wide, but after the staircase it felt spacious. A bench sat under the window, and a door opposite. A tiny side table sat beside the bench. The stair continued on after the landing, but Quill directed me to the bench, I sank down gratefully.

He peered out the window for a moment before sitting beside me. “This is a servants’ alcove for what used to be the queen’s chambers. They have not seen use since the fall. We should not be disturbed or heard here.”

I leaned back against the wall, the cool of the stone felt good after our climb. “Thank you.”

Quill grunted, leaning forward to rest his elbows on his knees. “The king trusts you a great deal, he doesn’t let many people see him with Hesperide.”

Rolling my head on my neck, I frowned. “You mean, that they are lovers?”

Quill shook his head. “That they are equals. He’s had other women, but Hesperide is special—for a number of reasons.”

“She said something about being in love,” I stopped rolling my neck and leaned my head back against the wall. “She also doesn’t act like any of the servants I’ve met in the palace.”

“Yes, true,” Quill passed his hand over his face, “She is excellent at reading people, and has behaved more like the Hess I remember these past weeks than I have seen…” he trailed off.

The silence stretched for several minutes. I was vaguely aware that I should be feeling more—between the news of executions, my pending interview with the Nether Queen’s ambassador, and of course the curious hints about Hesperide. But I didn’t feel. I was just very, very tired.

Quill’s strained voice interrupted my weary musing, “One moment, I see Hess joking and teasing like when we were kids, and I cannot help but believe we will succeed. The next, I’m watching my king preside while innocent heads roll in the Cathedral Square.”

I looked at him. One hand still covered his face and his shoulders drooped. I was reminded of how he’d looked when we finally got him to Boitumelo’s tent, months ago now. A handsome ragdoll dropped on a bench and left in a desolate posture. Except now instead of black armor he was wearing the blue uniform of the guard.

He continued, “How have we not defeated her yet? How does she take what she wants with barely a fight?” He gestured limply with his free hand, “We have the King of Dalyn—both of them—shouldn’t they be able to just declare us free from her rule? Should not the army rally and push her authority out of the city?”

“The army she built?” I reminded gently. Dalyn had nothing after Shyr Valla fell. The garrison was full of men hired by Narya Magnifique.

“Ah, yes. Her army.” Quill straightened and unfastened the buttons at his throat before leaning against the wall.

“We’re working on building an army of our own,” I reached out and touched his shoulder, “Namal is in the city now meeting with people. You said yourself we have hope now. They will rally around Trinh.”

“Even if they do, history will not be kind to Tarr Kegan.” He paused, his face twisted, “The Nether Queen’s pawn.” He laughed hollowly. “Did he tell you we’re now offering a reward for the capture of nymphs? We’ve had forty souls turned in already and it’s only been a few days. We’re going to have to start building more prisons at this rate—Some have turned out to not be nymphs, and the King had them released. Small comfort.”

No one told me anything, it seemed. I closed my eyes. Tarr’s moodiness was completely justified.

“He gives Namal and Trinh all the information he can, and they save as many as they can before the King’s dragnet sweeps through. It’s like fighting a barn fire with one bucket. A barn fire you’re forced to stoke with your other hand.”

Tarr was the ultimate spy, playing a horrific role in an unreal drama. If he was discovered, he would die, and his efforts would be wasted. If he wasn’t discovered, he would be reviled by the people he strove hardest to protect. I straightened and looked into Quill’s eyes, “Then we just have to make sure we are the ones writing the history.”

He smiled, then. Just a small one. “These will be dark chapters.”