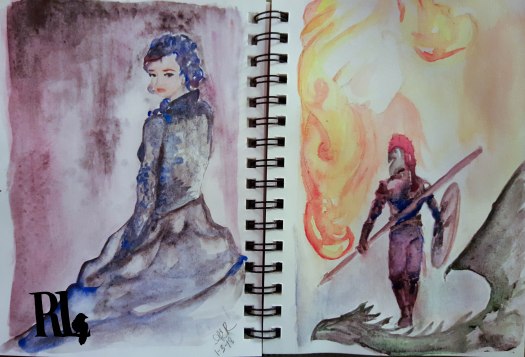 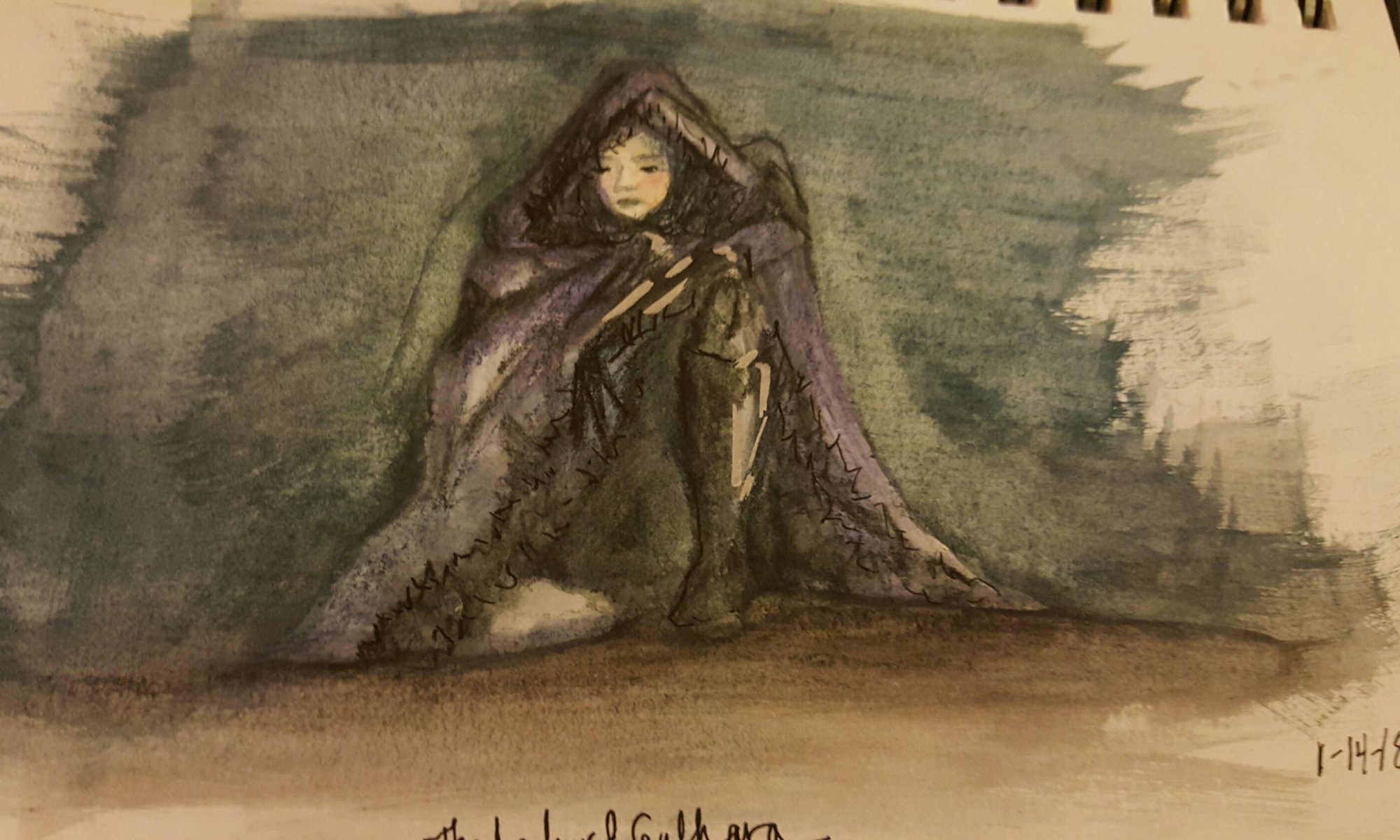 The warehouse smelled like fish and fresh water. Huge empty crates sat in rows awaiting the morning’s catch, though no catch had come for weeks. I was perched on top of a desolate crate, swathed in a fur lined cloak, watching shadowy figures arrive by ones and twos, and listening to the siren call of the river.  Most of Dalyn’s fishermen had been nymphs, and they had been everyone’s first thought when the Nether Queen’s order had come. Most had fled, and those who hadn’t were caught or in hiding. Winter deadened the blow to the economy, and the king had seized and consolidated many of the icehouses and their contents. Time would fill the demand for more fishermen, but for now everyone was too frightened to go near the wharves, with their checkpoints and patrols, if they didn’t have to.

Namal stood in front of me, also cloaked and hooded, arms crossed, a dark looming figure against the small lantern on the floor. Under the cloaks, we were in our black leather armor—Tarr had commissioned an entire new set for me with chain link sewn inside. When I’d protested the weight, he’d given me a withering look and made a comment about only pretending to be a vengeful ghost. I’d worn the armor a couple hours a day for the past three days in an effort to get used to it. I still felt like I tired quickly, and I was more than happy to sit behind Namal and watch people arrive. These were the people he’d spent the last two months talking to. The people who helped him get people out of the city. Mostly men, and mostly dock workers of various social strata. There were a few people from other trades, and at least one or two very fine cloaks in the mix.

My eyes wandered over to Domjoa, the black-haired thief who had persuaded me to take some criminals in my jailbreak. He was standing nearby, silent and cloaked. He was clean-shaven now, and had lost the pallor of prison. I guessed he was in his thirties, and must have been a successful thief, because under that cloak were clothes just as fine at the King’s. According to Namal, Domjoa helped them choose a warehouse, and had generally been quite helpful when it came to finding places to hide or stage. He had, after all, found a safehouse for us the very first night, outside of which I’d collapsed in a heap. He’d bowed and kissed my hand when I arrived with Namal, “Your Highness, it’s good to see you out and about.”

“It’s good to be out,” I replied, meaning it. “I trust you have been well, and well behaved.”

I wondered how many people he’d robbed since I’d released him. But I thought it was significant that neither Domjoa, nor Moonie the horse thief, Haystack the vandal, nor Shayn the murderer, had fled. Namal grumbled that he wished they had. But they were with the rest of my men—the ones from Gillenwater who owed me their lives—stationed around the perimeter of the warehouse, keeping watch. They were a comfort, ironically, considering that just a couple months ago we’d been trying to kill them. But Namal and I had come alone from the palace, and it felt strange to be out without Quill or Jemin nearby.

Trinh arrived, slipping in to my right and lingering in the darkness with a couple of his men. According to Tarr, eight knights had awoken with Trinh, and none of them had aged since the day Shyr Valla disappeared. I’d never seen them before, and tried to get a good look at them without openly staring. They stayed too far from the sad pool of lantern light for me to learn anything interesting.

Another shadow moved into the circle of lamplight with the grace of a dancer. I jumped off the crate and turned quite a few heads as I bounded into the arms of Ayglos.

Ayglos grunted at the impact, but laughed softly as he wrapped his arms around me. “Hey, Little Zare.”

Armor doesn’t make for the warmest hug, but I didn’t care. I grinned. I hadn’t seen Ayglos—or the rest of the family—since coming into the city. I was happier than I could have imagined to have my accomplice brother back for a couple hours. Ayglos held me at arm’s length and we inspected one another. He looked good, dressed in black armor exactly like Namal’s, with the albatross emblazoned across the chest. His muscles were hard, and the armor was not pristine. He had been busy, spiriting Nadine around the surrounding towns to do small good deeds in the night and spread the rumor of the ghostly armored girl who might be Nelia of Legend. Or who might be an heir of Galhara. . “You look good,” I said.

“So do you,” he rapped his knuckles on my pauldrons. “New armor?”

Namal intervened, clasping Ayglos’s arm in greeting before motioning us back to the spot behind the lantern. Now was not the time to catch up. We settled in place flanking him, leaning against the empty crates. I wondered if Namal had told Ayglos about my injuries or not. They had seen each other at least once since the jail break.

Namal stayed in the light of the lantern and addressed the small crowd grouped in its penumbra. “Friends, thank you for coming tonight. I’ve gathered you because we all share a common interest in protecting the innocent, and the future of Dalyn.” He paused, “I wanted to tell you about an opportunity which is before us: The Nether Queen will be coming to Dalyn for the Midwinter Ball.”

Silence stretched a few heartbeats too long before one of the men coughed. “What?”

Air released, another said, “She’s coming to crush us.”

Namal held up a hand to stop the fear from mounting. “She has undoubtedly decided that it’s time for a show of force, to remind Dalyn why she is Queen.”

“What kind of show of force?” someone asked.

“She’ll wipe us off the earth like she did to Shyr Valla.”

“Stop,” Namal’s voice was sharp, and powerful. I was glad it was not directed at me. “If she intended to wipe Dalyn off the map, she would have six years ago. She needs this city. This is an opportunity. For us. She will be more vulnerable on this journey than she is in her palace. She will leave her stronghold at Hirhel and travel through the mountains to the river,” Namal continued, “then she will board a barge and come straight to our shores. We have an opportunity to take the head off the snake and see what becomes of her empire.”

“Fat lot of good it will do to be rid of the High Queen when we still have her lackey, King Nymph’s Bane,” grunted one of the dock men. “What’s to save us from him?”

“He will be no trouble,” Trinh stepped into the light of the lantern, tossing back his hood, causing the gathered to gasp and recoil. He’d not been to any of these meetings of Namal’s, though a few of those present had heard Namal speak of the returned prince. Trinh, grim faced, with burning blue eyes and broad shoulders, filled the space with his presence. And looked so much like his brother.

For a moment, I feared they would mistake him for Tarr and tear him to pieces.

If they could, that is.

I needn’t have worried.

“By Fornern…Trinh Kegan!” said a gray-haired man with nicer clothing.

“How is this possible?” demanded another, a dock worker.

“Where have you been?”

“No trick,” growled Trinh. “I was laid low, but now I have returned and I will take back my city.”

Laid low was certainly one way of putting it. Simpler than explaining the truth. Less frightening, too.

“Prince Namal told me you were alive,” said the gray-haired man. “I did not really believe him—though perhaps I should have, since he also should not be alive.”

“The Queen’s conquest is not as thorough as she would have you believe,” said Namal dryly.

“Narya Magnifique is a tyrant and an oath-breaker,” Trinh’s voice filled the room. “She has long waged war for her own ends, seeking to conquer all eight cities and set herself up as empress over all of Daiesen Bay. And I opposed her.” He began to pace slowly around the lantern, his burning gaze sweeping over the faces, “Her taxes are severe, her brutality unacceptable, her armies a plague. Entire cities turned to rubble or enslaved, an entire race hunted without provocation. She seizes their riches for herself.” He paused, his chest heaved, his face filled with intensity. “There is blood in the Cathedral Square. And it’s spreading. Her influence corrupts everything that is good. Neighbor turns in neighbor for coin. Betrayal is the only thing to be trusted. Orphans are made, maidens are kidnapped, young men are beaten. Children are forced to watch their own parents killed. Slaughtered in profane rituals to whatever demon she worships.”

Suddenly he wasn’t talking about recent events anymore. I felt my heart pounding, drawn by his passion. His terrible, thrumming passion.

He continued, reining himself in. “The Queen won’t bring a full army to the Midwinter Ball, compared to Hirhel, she will be unprotected. This is our chance to end her reign. With your help, the cities will be free again.”

Spring is such a time of travel madness it puts a serious damper on writing time and energy. Zare will return as soon as I can manage! In the meantime, I’ve done a little painting. Not, you know, a LOT, since I’ve been rather busy, but a little!

I’m not sure this piece is done, but it’s Trinh approaching the spot where Shyr Valla, the Eighth City, used to be. Trinh is actually one of my favorite characters in the big story. The big story, of which River Rebellion is only the beginning.