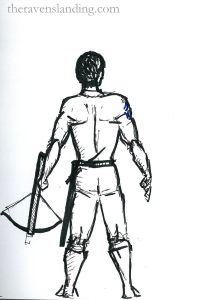 Balleck grunted and reeled back on his haunches.

My hands flew to my mouth, and then I reached for him, “Balleck! I’m sorry.”

He grunted again and waved me off, “By Fornern, Zare, ouch.”

“I’m alright. We need to get out of here,” replied Balleck, still rubbing his jaw.

“He’s wounded,” I gestured to the archer.

“Doesn’t change anything,” quipped the fire spinner. He thrust my cloak and hat into my arms.

“I agree,” added the archer, rolling gingerly to his back and sitting up. “Help me up.”

Balleck and I both stooped to help the archer and were both startled when the archer cursed sharply and hissed “Gently!”

With him between us, we got his good leg under him and his arms slung over our shoulders. Balleck handed me the archer’s bow, “Hide this under your cloak.” And then he took the lead. We shuffled through the shadows as quickly and as quietly as we could manage, wending our way toward the city wall avoiding street lamps.

The streets were as empty now as they had been full when Olena had towed me to the Glass Tree. The wheat sentries looked forlorn on their street corners—like they were the only ones not invited to the party indoors.

We stopped in the shadow of a building and regarded the gates. Soldiers had set up a checkpoint and were scrutinizing the few souls who were determined to sleep at home tonight.

“We may need to go back and hide in the city,” muttered Balleck.

I arched a brow, “How is that supposed to help?”

The archer looked at me sharply. “Find wine,” he said firmly.

Balleck and I exchanged looks and Balleck’s shoulders drooped. “I think I saw a winery around the corner, are you alright to stay here?”

He was looking at me, I nodded. Panic was long gone. Balleck left the archer leaning on me and disappeared back the way we had come. Suddenly the archer was extremely heavy. I cast about, finding some crates I shuffled us toward them. “Let’s sit.”

“Best idea,” sighed the archer. He sagged against me, his head dropping to my shoulder. He smelled like the Tryber, but for some reason I didn’t mind.

For the first time I realized that the wet on his clothes wasn’t all water. I plucked at his sleeve and my fingers came away sticky. Light from the street lamps caught the alarming gloss of blood all down his arm. I swiveled carefully, trying to see better, “You’re very hurt.” And young, and quite good looking.

“What happened?” I asked.

Before I could retort, Balleck came back around the building carrying two small bottles. “I brought wine.”

The archer perked up and reached out. Balleck handed him an uncorked bottle, which he took and drank deeply.

Balleck took a long drink from the other bottle. “This still doesn’t get us out of the city.”

The archer wiped his mouth and turned to me. “Give me your cloak.”

“Your cloak—to cover my wounds, and my weapons,” he gestured to himself. “The wine, to cover the limp.”

Understanding began to sprout. I slung my cloak around his shoulders and clasped it, making sure the cloak covered his armored chest. I also tucked his bow into his wounded hand to be covered by the folds. He lifted the wine bottle in salute.

Balleck stooped and wrapped the archer’s better arm around his neck. “Then let us revel.”

The three of us stepped from the shadows with plenty of drunken swagger. I grasped the archer’s wounded arm, along with the bow, as carefully as I could while stumbling and giggling like an idiot. At least nerves made giggling easy. Balleck started a slurred song—I recognized lines from the harvest song we’d been dancing to—to my surprise the archer joined in and the two slurred and swagged down the road with their wine held aloft.

The soldiers watched us with disgust as we approached the gate and passed through. My heart thundered in my chest as we moved into the safety of darkness outside the city walls. We had succeeded. Even though I hadn’t really considered failure, success was still hard to believe. Balleck kept singing as we went, but we walked normally now—or as normally as we could half-carrying the wounded archer.

The circus seemed miles away at our pace; I listened to the archer’s labored breathing with growing concern. The red fence was a welcome sight, and even more welcome was the sight of Remko’s bald head in the gap.

When Remko saw us he ran forward. I let go of the archer and jumped into our old captain’s arms. All the captain of the guard’s fears transformed into a crushing embrace. “Is Ayglos alright?” I managed as I gasped for breath.

Remko set me down and looked me over, “Yes. He’s here. I was coming to look for you. When you and Balleck did not come back we feared the worst.” He touched my shoulder, a deep frown spreading across his face, “What’s this?”

I glanced down and saw the archer’s blood smeared on my hands and sleeves. “He’s wounded,” I turned to Balleck and the archer, who were waiting patiently.

They really did look like a pair of harvest revelers who’d drunk too much. Their wine bottles still dangled loosely in their hands, and they looked on the brink of toppling. I sensed Remko stiffen with suspicion and I moved quickly to the archer’s side.

“Remko, we must take him to the physician,” I lifted my cloak off his bloody arm—revealing the wound and the bow—and gave my old guardsman a look that declared no argument.

Remko relented—though I was pretty sure it was the look, not the bow, which convinced him. I put the cloak back in place. The rest of the circus hardly needed to know about this. Remko took my place supporting the archer, and I led the way to the family doctor—a man whose talents had been most welcome at the circus.

One Reply to “5-The Archer”