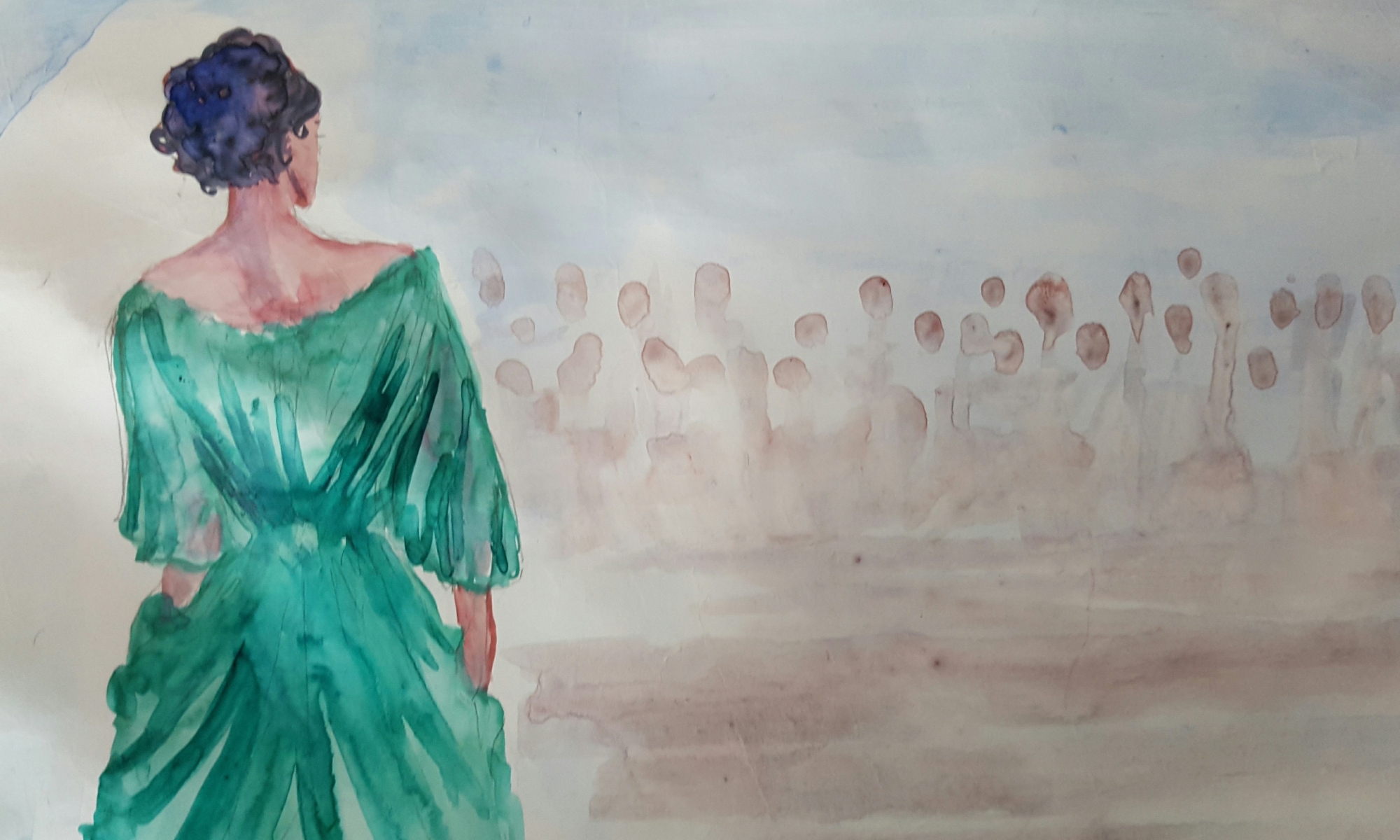 I spun to see Lucius Tene smiling at me, a glass of wine in his hand, blue eyes sparkling. “I did not expect to see you here tonight.”

I managed a smile, “Lord Tene,” and dipped in a hasty curtsy.

“Is this your brother?” Lucius looked over my shoulder at Namal.

“Lord Tene, this is my brother, Alban Meredithe,” I finished the introduction, grateful that my halting delivery could be attributed to my simple persona, and not to how very much I hadn’t wanted to bump into him.

Lucius grinned, bowing slightly at the waist. “It’s my pleasure to meet you.” He lifted his wine glass, looking at me over the rim, “Have you seen Bel yet?”

“Of course he is, anyone who’s anyone is here,” Lucius smiled again, “I left him watching the performance.” He plucked my wine glass out of my hand and deposited both our glasses on the tray of a passing servant. “But I tired of watching dancing and wanted to do some dancing myself. Do me the honor.” He bowed slightly and offered his hand.

In the center of the room, there was a space left open by the crowd, in which twenty or so people were twirling to the very same music to which the professionals at the other end of the room performed.

I cast Namal a glance, his lips were thin, but he nodded. Perhaps if I danced with Lucius he would leave us alone before the Queen came out. She would come, here would be a ceremonial dance, then she would return to the dais and attention would shift away from her and we would make our move. We had plenty of time. I smiled at the handsome lord and put my hand in his, “If you insist.”

Lucius led me to the dance floor and twirled me as we stepped into the open. His hand settled on my waist as I came back in and we smoothly joined the rest of the revelers. I was painfully aware of how his hand sat right underneath the tips of my daggers.

I cocked my head, “Does he? Have you been down at the wharfs?”

“No, I have not,” replied Lucius, the sparkle still in his eyes.

Lightning bolts of panic started to crackle through my veins, but I kept my tone light, “Have you been thinking of me very often, perhaps? My brother and I do look alike.”

“You are enchanting.” Lucius spun me again. “I don’t think that’s it, though.”

“Perhaps he just reminds you of someone,” I suggested.

“Yes, someone I saw once, many years ago. At large event something like this. Foreign dignitaries.”

I met Lucius’s gaze. He knew. He recognized Namal. I opened my mouth to say something, anything, but a figure stepped up to us.

“Bel!” Lucius paused our motion and grinned at Bel Valredes.

“Of course,” Lucius released me and bowed. I stared at him as he kissed my hand. A gestured normally reserved for royalty. “It was lovely, Miss Meredithe.”

“Lucius…” the protest died on my lips. I could hardly go running after him. Could I?

“Analie,” Bel stepped close, settling his hand on my waist to dance, but he was not nearly as committed to the dancing as Lucius had been. “What are you doing here?”

“It’s the Midwinter Ball,” I said, trying to look at Bel and keep track of Lucius at the same time.

“You shouldn’t be here,” Bel bent close as we turned slowly in a distracted version of the dance.

“What do you mean?” I’d lost Lucius. He’d stepped away from the dancing and I couldn’t tell where he’d gone. I cursed inwardly and colorfully.

“Please,” Bel was shaking his head. I dragged my eyes back to him. “Analie,” he hesitated, tension creasing his brow, “you should leave.”

“I can’t explain. Please leave.” The song ended, and we stopped moving. Bel let go of my waist but kept my hand. Our eyes met, “Trust me. You don’t want to be at this party.”

My gut tightened. This was more than broken heart business. “What’s wrong?”

“Just go.” He started to turn me toward the door, but a fanfare began to play. Bel cursed. I spun to face the dais. Four black clad guards marched from the king’s entrance and arranged themselves across the back of the dais. The fanfare continued, and the entire assembly turned toward the front of the room and drew closer to the dais. I tugged my hand away from Bel and started to make my way toward back toward where I’d left Namal.

I’d never seen the Nether Queen before. My steps slowed as I tried to get a good look. She looked younger than I’d imagined. She had to be at least twenty years older than my parents, but looked the same age, and just as well preserved. Her gown was black that shimmered green in the light. A high collar framed her sculpted neck and shoulders. A crown with tall, thin spires sat on black curls, shining in the lamplight like every bit of it was covered in gems. Her face was oddly familiar with high cheekbones, startling blue eyes. Her lips curved up in a faint smile laced with cruelty.

Khattmali entered, looking pale. Behind her, Tarr walked into view flanked by two guards in black. The fanfare ended and the room became very quiet. Was that blood on his face? A gasp swept through the room as the crowd also noticed the red trickle coming from the King’s nose. I took a step toward the dais.